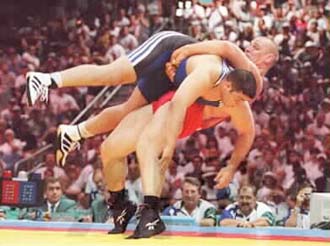 Recently in the MMA world, it has been shown that fighters who incorporate wrestling into their fighting style are able to dominate the sport.   Crazy random things happen when both fighters are on their feet.  But wrestlers bring the match to the ground and stay on top.  Also, by wrestling it becomes very difficult to bring you to the ground. If you can learn to wrestle, you are giving yourself a huge positional advantage in a fight.  Plus, being able to pick people up and slam them is really cool.

From an offensive martial arts standpoint, the way to win fights is not usually from your back. Yes, it can be done but it involves a lot of Jiu Jitsu prowess and sometimes that won’t even help. Look at B.J. Penn vs. George St. Pierre… B.J. may be the best Jiu Jitsu fighter in the world but he couldn’t submit G.S.P. and being taken to the ground cost him the fight. GSP’s superior wrestling training allowed him to dominate the fight. A great way to win fights is to be on top of your opponent. This puts you in a position to throw a ton of powerful strikes, improve position to use submissions, and gives you a lot of leverage to execute many offensive fighting tactics while not consuming a ton of energy. By training wrestling moves, you can be sure to have the upper hand in a fight.

You don’t have to have a history in wrestling training to use the techniques effectively.  By mastering one or two techniques, you can have a huge technical advantage.  If your opponent turns out to be a better striker than you are, you will be relieved to know that you an alternative to getting your face punched by executing a wrestling takedown.  Just like anything else, when trained diligently enough, wrestling becomes second nature and takedowns flow like a powerful river. While wrestling training isn’t right for everyone, those that are serious about learning mixed martial arts have to have some experience in this field.