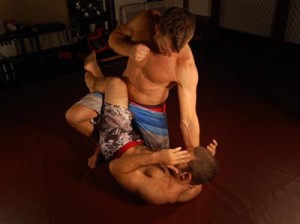 You're not supposed to punch in Jiu Jitsu, but we keep it in mind while we practice...

Jiu Jitsu, translated “gentle art”, is a complex grappling martial art that has garnered a lot of respect in recent years.  With the foundation of the UFC, Jiu Jitsu was seen be be an incredibly effective virtually dominant martial art.

Instead of striking an opponent to the point of knockout, Jiu Jitsu relies on the one’s ability to choke or break the joints of an opponent. Early in the UFC a smaller, lighter fighter reigned supreme using only Jiu Jitsu.  This all-out dominance has changed, but the efficacy of the art and the importance of it’s use can be witnessed in all mixed martial arts fighting today, which means it would work for us on the street or in a bar. By training Jiu Jitsu, you will build incredible strength, and be prepared for a fight whether you are standing, or on your back.

Undertaking Jiu Jitsu training is beneficial both physically and mentally.  It takes a lot of strengh and endurance to manipulate the joints and levers in a fighting opponent, especially when he’s trying to prevent you from doing so.   The muscular activity combined with the intensity of fighting against someone who’s trying to “tap out” or give up is fatiguing.  You tend to work extra hard when trying to stop someone from physically defeating you via choke or joint-lock.  Mentally, you also gain strength.  Frequently trapped in compromising positions, you may find yourself challenging new ranges of motion, previously untapped and being forced to find mental peace while in uncomfortable spots.  This work will make you extremely strong and flexible, as well as dangerous.  This is an extreme way to develop control of body and mind.

You might find Jiu Jitsu to be a more “humane” way to win a fight or defend yourself.  While choking someone or possibly breaking their joints, it might sound pretty brutal, but hear me out.  Jiu Jitsu offers the option to end a fight without having to bludgeon your opponents head and body with your fists.  There is a mental peace that you might feel in knowing that you can take your opponent to the ground, choke them to a brief peaceful sleep, and walk away while they snore for a second before waking up… virtually unharmed, but clearly defeated.

Jiu Jitsu training takes patience and practice. If you devote the time and energy necessary towards becoming more dangerous on the ground you will find peace of mind and make drastic physical improvements. Eventually, your senses and abilities will also grow, allowing you to think one step ahead of your opponent.  Now, if the fight moves to the ground, your mind can remain calm… you are safe here, and your opponent is in danger.  Jiu Jitsu training reminds us that technique frequently remains supreme when it comes to winning fights.