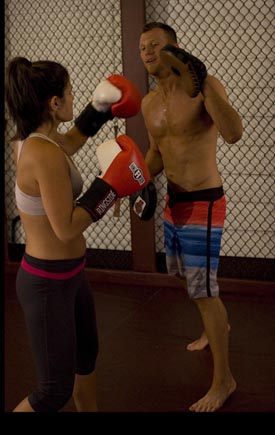 Boxing training should be the fundamental groundwork laid for anyone working to develop their striking skills. Too many fighters in today’s age neglect their boxing abilities.  As a result, they end up remaining easy to hit and unable to effectively set up the combinations that help to make their attacks land.


The footwork you will develop by working with a boxing trainer can be applied to all stand-up fighting arts, and will keep you out of harms way.  If you become adept enough with boxing footwork, you can win fights simply by moving around, making your opponent chase you, and tiring him out before your attack.

The hand speed and power you develop will make you dangerous the moment you decide to punch.  There is no shortage of focus on your punching mechanics in boxing training. You will develop crushing power in your hands by paying attention to technique.  A knockout is an immediate end to a fight. Who doesn’t love a little extra power in their punches.

Boxers are elusive and difficult to strike.  Head movement and avoiding punches may look like magic when you watch the pros do it on TV, but like everything else in fighting, the movements can be replicated, repeated, and trained so that you don’t even have to think about it; your body remembers and you move based on instinct.  When your opponent initiates a punch, your head will instinctively bob to the side and the punch will slide by, leaving your foe open to a counterpunch (should you be trained well enough to throw one). A good boxing trainer should focus a considerable amount of workout time on training your to move your head.

There is also something cool about the simplicity of boxing training. Pieces of equipment like a speed bag are irreplaceable in a good training regiment.  Punching a fast moving object repeatedly, fatiguing the shoulders, and training your eyes to follow a target is an invaluable course of development. Working on a heavy bag to increase punch power while building footwork is extremely important. Finding crafty ways to make sure your punches land can be the difference between winning a fight and losing a fight.

Adding boxing to other styles of fighting creates a more lethal art.  Clearly boxing is incomplete, there are no kicks and no takedowns.  As a result, an excess of attention is paid to the way your hands function and the way your head and body move.  However, if you as a boxer can throw a solid kick, you become far more dangerous. Kicks become more effective when set up by skilled punch combinations.  Conversely, by adding kicks to a boxer’s technique, the ability for his or her hand strikes to land is increased tremendously.  Boxing training will open your eyes to a new world of martial possibilities.